Can behavioural design and gamification combat a water crisis?

We built TapOff to inform, empower and gamify water saving during the Cape Town water crisis. A project that received recognition from the press, Monocle24 and Google.

Services offered on this project

Water scarcity is here to stay, and water consumption will need to change. It’s been said that Cape Town could be the first major city in the modern era to run out of water. But from crisis comes innovation.

In January 2018 we launched a personal project which aimed to inform, empower and gamify water saving for residents of Cape Town. TapOff is a free mobile app that not only provides Capetonians with real-time updates on the city’s water consumption, but also inspires them to make positive changes that will have a lasting impact.

Information alone doesn’t drive behavioural change. The key is to summarise and frame it in a way that’s meaningful to the individual. Besides displaying the city’s overall consumption for the week, TapOff enables users to calculate their own water usage and compare it with the maximum amount prescribed by city authorities. In this way, individuals see how their efforts can make a real difference to a community-wide issue.

An online platform that informs, empowers and motivates.

The app goes even further to encourage participation by gamifying water-saving with suburb leaderboards where residents can display their consumption figures. The response has been incredible with growing numbers of users posting their water usage to neighbourhood leaderboards on a monthly basis – over 80 suburb leaderboards have been activated.

Extending the reach beyond the mobile application.

In partnership with Tractor Outdoor, TapOff’s other feature is a public API, which serves outdoor media in real-time. The digital billboards make a clear emotional connection with the viewer about Cape Town’s overall water consumption, putting the city’s progress quite literally front and centre. It’s also a friendly reminder to keep up water-saving efforts – whether you’ve downloaded TapOff or not.

Locations around the city where TapOff billboards are being displayed

The studio has written an algorithm to dynamically display a different message and a corresponding emotional reaction to the current state of water consumption in the city. If water use goes up from the previous week a stressed character is displayed. But if water use goes down the message is more celebratory encouraging citizens to keep going. But we also needed to cater for when water usage continues to climb week-on-week, and vice versa. 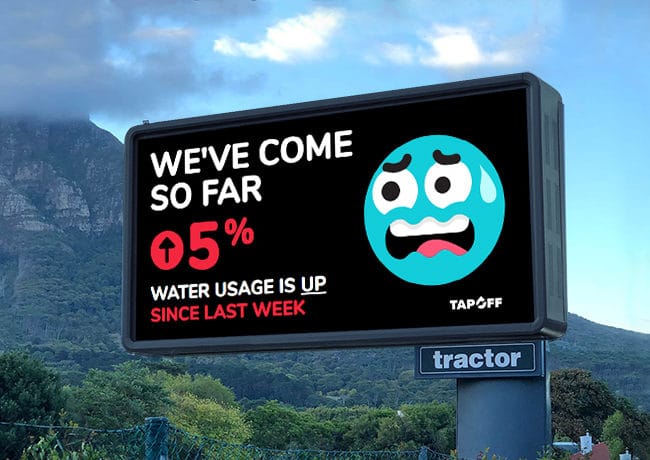 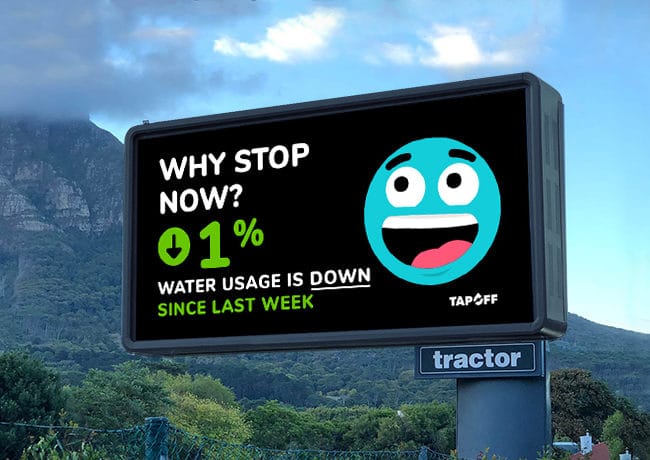 Did it work, and what’s next?

During the build towards DayZero the TapOff app was so popular that it was trending in both the Android PlayStore and Apple App Store. Users flooded in to claim their place on the suburb leaderboards. We were also interviewed by Google Developer Stories and Monocle24 about the project. The mobile application continues to deliver the latest water consumption information and our billboards are continuous reminder to citizens of where water consumption stands, week on week.

The studio continues to improve the quality of features and actively releases updates for iOS and Android. The crisis is far from over, and rainfall and dam levels are an on-going concern for the city. Over the last three months we have connected with great initiatives and smart people whom we’re actively involved with to create innovative solutions during this time of crisis.